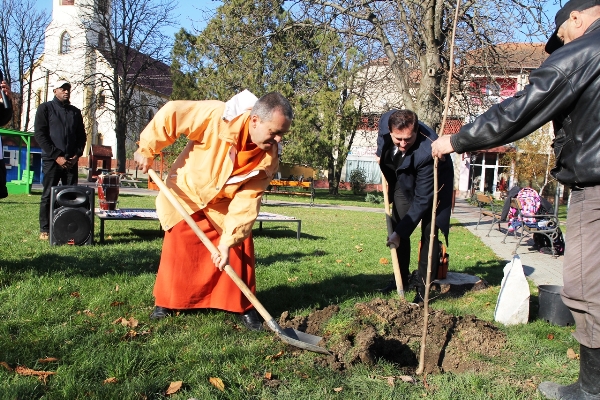 On a nice sunny day, 18 November 2016, the first World Peace Tree was planted in Romania. The ceremony took place in the multicultural and multireligious city of Nadlac.

Once the tree was planted, all who were gathered sanctified the occasion by chanting Vedic peace mantras. Romanian and Slovakian songs were performed by children from Nadlac and the neighboring city Seitin, and Swami Gajanand gave a touching speech and sang a bhajan (traditional Hindi devotional song). In these ways the message of peace was spread throughout the ceremony.

After the ceremony, together with the city mayor and the Roman Catholic priest Demeter Salman, Swami Gajanand visited a Catholic, a Protestant and an Orthodox church and finally the City Hall.

As a result of the Peace Tree planting, Swami Gajanand was invited to give a lecture in the school for children from 5-8 grade. He told inspiring stories illustrating how three principles can change our life: "Understand, Accept and Give".