Homage to the International Day of Peace 2006 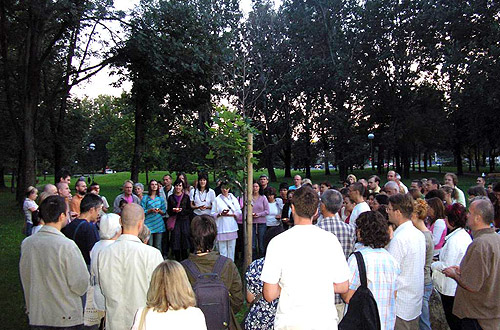 Since 1981, September 21 is established as the International Day of Peace. The United Nations initiative was readily embraced by thousands of different groups, organisations and individuals from all over the globe, devoted to contribute to world peace. Numerous events take place world-wide on this day to remind us of the necessity for peace in the world. Yoga in Daily Life participates as well with various initiatives to involve people in fostering the culture of peace.

On Thursday, September 21, 2006, 'Yoga in Daily Life' - Vienna/Austria celebrated the International Peace Day in presence of the Ambassador of India to Austria, Dr. Sheel Kant Sharma, with an inter-religious Peace Prayer at the Peace-Tree in Schweizergarten, planted in 2005 on the occasion of the opening of Guruji's Ashram. Peace Prayers were spoken by: His Holiness Mahamandaleshwar Paramhans Swami Maheshwarananda; Father Elmar, Parish Priest of Kaisermühlen, Demir Can Durmus, Teacher of religious education of the Islamic Community; Thomas Fiedler, Chairman of the Budhhist communities in Austria; Dr. Bimal Kundu, Head of the Hindu temples in Vienna; Triloki N. Ahuja, Hindu Religion Society of Austria; Sadhvi Dr. Shanti Puri, Yoga in Daily Life, Vienna.

In Slovenian seaside city of Koper visitors and citizens of this beautiful town lighted more than 600 peace-candles. The event was organised by local 'Yoga in Daily Life' society as homage to the International Day of Peace, in the spirit of world peace and tolerance among different nations and religions. Children of the local primary school participated with their drawings and texts and some of their works will be exhibited in Slovenian capital Ljubljana at the coming World Peace Summit (October 13 to 15, 2006).

'Yoga in Daily Life' Society from Novo Mesto is organising a round-table discussion on EU humanitarian and environmental projects, followed by a humanitarian concert later in the evening on October 4, 2006. Entire income will be donated for the World Peace Summit in Ljubljana.

For the first time in Croatia the national Union of "Yoga in Daily Life" has observed the International Day of Peace. In three cities, Zagreb, Cakovec and Split, representatives of many associations, religious groups, local authorities and citizens, committed to peace, gathered at locations of previously planted "peace-trees" (by His Holiness Mahamandaleshwar Paramhans Swami Maheshwarananda) and expressed their hopes and prayers for peace in the world.

'Yoga in Daily Life' societies from Budapest, Debrecen, Szeged and Erd organised several events to honour the International Day of Peace. In Budapest, they held a collective peace-meditation with a prayer for peace. Candles, bhajans and prayers were offered in Debrecen by local YIDL society and passers-by, while Szeged organised a gathering with citations, bhajans and discussions about necessity and ways to peace. Erd YIDL society held a whole day programme where they offered free classes of asanas, meditation and open-air yoga. People were invited to produce their own peace-flags and light candles for peace. The programme ended with an open meditation and prayer for peace in the world.