International Conference on Yoga in Daily Life & Health in Jodhpur 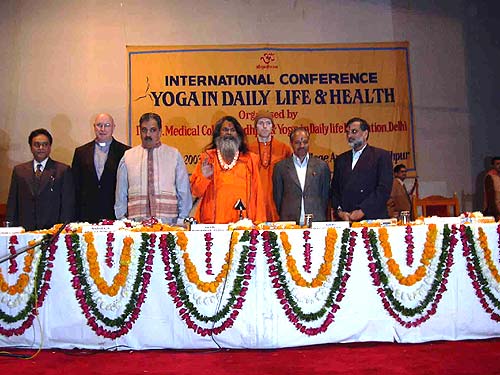 Dr. P. K. Gupta, Principal of the Medical College of Jodhpur opened the conference in recognition of Yoga in the effective management of most diseases. Paramhans Swami Maheshwarananda Ji then shared with the delegates his 30 years experience of teaching Yoga throughout the world, and said that when we stray from the path of discipline and law of nature, then the consequence is always ill-health and disease. Yoga, he said is not just physical exercise, but is the path for humans to gain immense spiritual development.

Many honourable speakers followed and here are some excerpts from their expositions.

Shri Gaj Singh Ji Maharaj said that it was a great privilege for this conference to be held in the sun-city of Jodhpur, with the presence of saints of great wisdom and the knowledge of so many medical profesisonals. Shri Gaj Singh Ji praised the Jodhpur Medical College for bringing the subject of Yoga in Daily Life to the medical faculty, since for many years Swami Maheshwarananda's system of Yoga has been tremendously successful in many foreign universities.

Dr. Martin Repko from the Medical University of Czech Republic presented his success as a doctor in applying the 8-level system of Yoga in Daily Life in the treatment of diabetes mellitus and nervous system disorders.

Physiotherapist Harriet Bucher from Austria presented the practical approach she uses in her clinic in treating patients with serious back and neck problems, applying the gentle exercises from Yoga in Daily Life.

Dr. Kamal Taori, Asst. Secretary of the Government of India, Interstate Council Secretariat of Home Affairs, Delhi, praised Yoga as a highly effective means not only in treatment, but in preventive health care that will reduce India's health care budgets. He expressed a need to train consultants in Yoga to begin working at the grass-roots level of the population to better manage health care of citizens.

In her presentation, Dr. Sylvia Mushawar (Sadhvi Shanti) from Austria, said that the practice of Yoga is not a question of time, but a question of choice – since each of us can make the decision to create just a few minutes each day for its practice. She further elaborated on the Yoga in Daily Life technique of Self-Inquiry-Meditation as being highly beneficial in maintaining balance of the psyche, thereby reducing stress and tension.

Dr. A. Mathur, Associate Professor of Medical College of Jodhpur, spoke of the scientific proof of Yoga being the only anti-stress response positively produced in laboratory tests through its effect on the brain. Dr. Mathur emphasized the importance for medical practicioners to view their patients in a holistic manner, since Yoga is holistic in its approach and can positively manage such conditions a high blood pressure, asthma, epilepsy, digestive disorders, and even relieve symptoms of cancer and aids.

The conference was closed by honourable guest Monsignor David Cappo, Vicar General of the Catholic Archdiocese in Adelaide, South Australia. Monsignor Cappo works closely with the government of his state in Australia on issues of health care and he expressed the growing need worldwide to recognize practices such as Yoga in preventive health-care. As a spiritual leader who is committed to the promotion of inter-faith dialogue between the different religions of the world, Monsignor Cappo has worked closely with Paramhans Swami Maheshwarananda and said that Yoga has contributed greatly to the health of the entire world and to the promotion of greater tolerance between individuals which is the only way to lasting world peace.