Near a very busy road Podunavlje - Kozjak, the ‘Paramhans Swami Maheshwarananda Peace Alley’ has emerged in the Kopački Rit Nature Park. It consists of 400 saplings of wild fruit trees – cherry, pear, apple, walnut, black and white mulberries – trees which normally form part of the forest population of one of our most biologically diverse nature parks; this is a gift of the members of associations of Yoga in Daily Life from all over Croatia, and many other European countries.

The last tree was solemnly planted in the presence of few hundreds donors and representatives of the centres of Yoga in Daily Life from neighbouring countries of Croatia, Slovenia, Hungary and Serbia.

“The Croatian Association of Yoga in Daily Life this year celebrates its 30 year anniversary and we decided to do something good not only for humans, but also for nature, animals and birds. Inspired by our Master, Paramhans Swami Maheshwarananda, we are involved in two campaigns: ‘Plant the Trees’ and ‘Save the Birds’.”

“In Kopački Rit we found a solution for combining these two actions; and I am sure that with this action we have not finished, but we will continue.” declared the president of Yoga in Daily Life of Croatia, Mahamandaleshwar Swami Vivek Puri.

PR director of the Kopački Rit Nature Park, Ružica Marušić expressed the gratitude of this Public Institution, “We are extremely satisfied with this commendable idea and the successful implementation of the largest donation to Kopački Rit to date. With great joy we talk to children who visit Kopački Rit and tell them how easy it is to plant a tree, and how important is its function.” Along with Swami Vivek Puri, Ms Marušić began planting the first few trees of the 400 in this donation. They were joined by representatives of Yoga in Daily Life centres from all around Croatia, as well as guests from Slovenia, Hungary and Serbia, and our youngest members, children accompanied by their parents.

In this active and responsible way, Yoga in Daily Life celebrated 30 years of presence in Croatia. Decades of effective work; promoting a healthy and active lifestyle; participation in the community through charity work; working with children, groups with special needs and most recently the socially vulnerable groups; is a beautiful bouquet worthy of celebrating on this anniversary. And now the activities continue with participation in two initiatives by author of the system, Vishwaguru Mahamandaleshwar Paramhans Swami Maheshwarananda: ‘Plant the Trees’ and ‘Save the Birds’. As part of the global `Plant the Trees’ campaign, hundreds of thousands of trees have been planted around the world in recent years; and this particular action is linked to the initiative ‘Save the Birds’, which aims to ensure the survival of this highly endangered and very important class of animals for natural biodiversity and ecological balance.

The day in Kopački Rit continued in a friendly atmosphere in nature, touring one of the most diverse biological nature parks in Croatia, with the announcement that cooperation will also continue during the next year.

Inspired by this action, the Karlovac Association of Yoga in Daily Life has announced a new planting and invited guests to join on Saturday 22 November 2014 for the planting of another 500 tree saplings in the Govic Forest within another beautiful Croatian nature park, the Zumberak Nature Park near Samobor, west of Zagreb.

About the tree alley and nature park Kopački Rit:

The “Paramhans Swami Maheshwarananda Peace Alley” follows several kilometres of the road in the park. All visitors to park travel along that road during the tour, so it represents almost an indispensable part of the park for anyone who visits Kopački Rit, leaving in their consciousness the beautiful message of peace. At the beginning of the alley is the memorial plaque which displays the distinguished name of the alley, the name of the donor, and a description of which fruit trees have been planted, and the purpose of this alley of trees in the park. 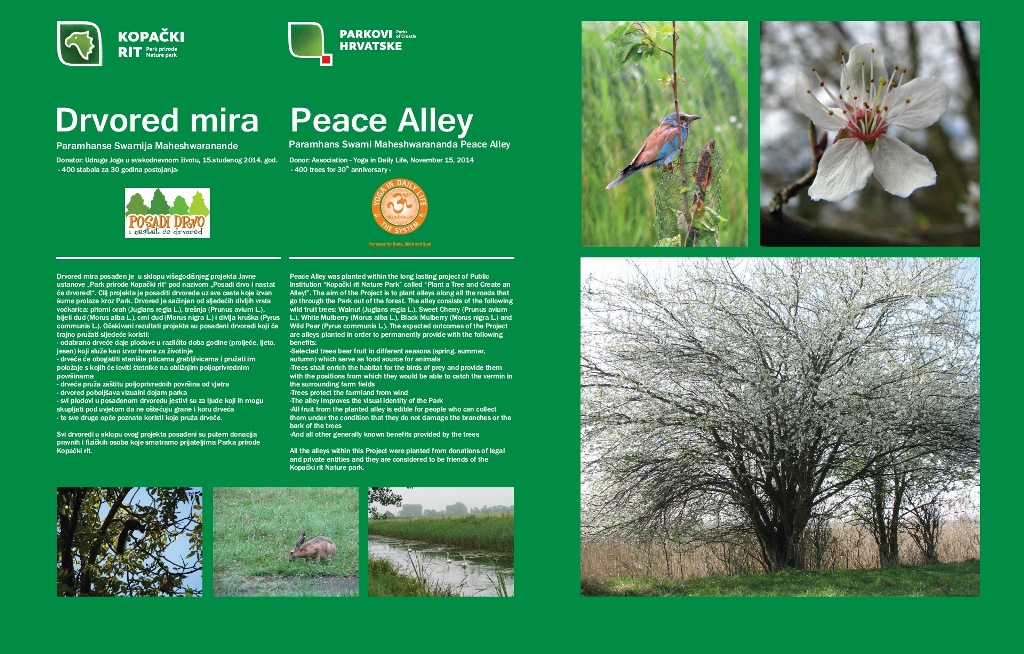 Kopački Rit is probably one of the most ideal places in which to easily unite both initiatives “Plant the Trees” and “Save the Birds”, precisely by planting wild fruit trees that are needed to keep the birds in one of the largest bird reserves in Europe. Kopački Rit is also unique in that it is mostly a swamp – one of the few wetlands still being preserved in Europe. This makes it an indispensable home to over 296 bird species, of which a significant number are threatened European and world species, such as the white-tailed eagle, which is used as a protective and identifying symbol of the park.

The park covers 177 square kilometres, and is bordered by two mighty European rivers, the Danube and Drava, whose overflowing water make the water park area – its lakes and ponds, watercourses and forests and, above all, its diverse flora and fauna, represent an unforgettable sight for every visitor. The wetlands are fascinating to many tourists who visit the park every day, admiring the really incredible beauty of nature which is to be found here. All present on this anniversary occasion were able to enjoy the many aspects of beauty in the park at the ceremonial planting the alley of trees, or by walking through or taking a boat ride on the largest lake, with expert guides.

The place is so beautiful there could be so much more said and written, but to experience it for oneself can only be possible by visiting and touring in person. The international importance of Kopački Rit was confirmed in 1993 when the park was included in the official “List of Wetlands of International Importance” in accordance with the Ramsar Convention on the importance of wetlands and waterfowl adopted in 1971 in Ramsar, Iran. Kopački Rit was also included in the list of ornithologically important areas - IBA (Important Bird Area); and was also nominated for acceptance as a UNESCO World Heritage site.

Reflections on the Anniversary celebration

“By supporting outstanding international initiatives of your association, the President hereby welcomes the work and activities of your members, with a wish for an equally successful sequel of praiseworthy activities to promote a healthy and active life."
– gracious words of praise, stated in a letter from the Office of the Croatian President, Ivo Josipovic PhD, addressed to Yoga in Daily Life Croatia and its president, Mahamandaleshwar Swami Vivek Puri, on the occasion of 30th anniversary of Yoga in Daily Life in Croatia.

Among the numerous congratulations, we are particularly pleased to receive a greeting from the author of Yoga in Daily Life himself, His Holiness Vishwaguru Mahamandaleshwar Paramhans Swami Maheshwarananda. We have also received many greetings from the national centres worldwide as well as the International Fellowship, which brings together all the national organisations of one of the most renowned and respected systems of yoga in the world.

Just how deeply Yoga in Daily Life has left a trace in Croatia and become an important partner of many institutions is, along with a letter from the Office of the President, illustrated by the message of congratulations from the President of the Office for NGOs with the Croatian Government, Igor Vidačak PhD:

“Your work is extremely important and we hope that you will continue with the promotion and teaching of a healthy and active lifestyle, as well as humanitarian and social work, and the expansion of two initiatives ‘Plant the Trees’ and ‘Save the Birds’ in Croatia.”

On behalf of all members of Yoga in Daily Life from the whole of Croatia, we sincerely thank all well-wishers, management of Kopački rit and especially the many Croatian journalists, media houses and newsrooms who in the last 30 years, were able to recognise the value of many actions that we have carried out – led by the principle of Mahatma Gandhi: “Be the change you want to see.” – in order to make our country a pleasant place to live and to leave a bright trail and secure base for generations to come.